LTC Insurance isn’t right for everybody. Suitability refers to the process of determining whether it makes good financial sense for someone to buy long-term care insurance.

All states require insurance companies and agents to make a reasonable effort to determine the appropriateness of a recommended sale or replacement. Some states require that agents use a state-specific Personal Worksheet or to provide state-specific educational information to all clients before accepting an application.

Companies have defined specific procedures you must follow to address suitability considerations in all states, including those that do not require the Personal Worksheet. These specific procedures must be followed to help your clients determine whether it is appropriate for them to buy or replace LTC Insurance coverage.

There are six key issues to evaluate the suitability of LTC Insurance for your prospective clients:

Historically, LTC Insurance was considered a “Senior Issue” – something that needed to be considered in conjunction with retirement at age 65.

Over the years, LTC Insurance prospects are making the decision to purchase earlier and earlier, driven by concerns with higher premiums as they age and even more importantly, the possibility that their declining health could impact their ability to qualify for coverage. 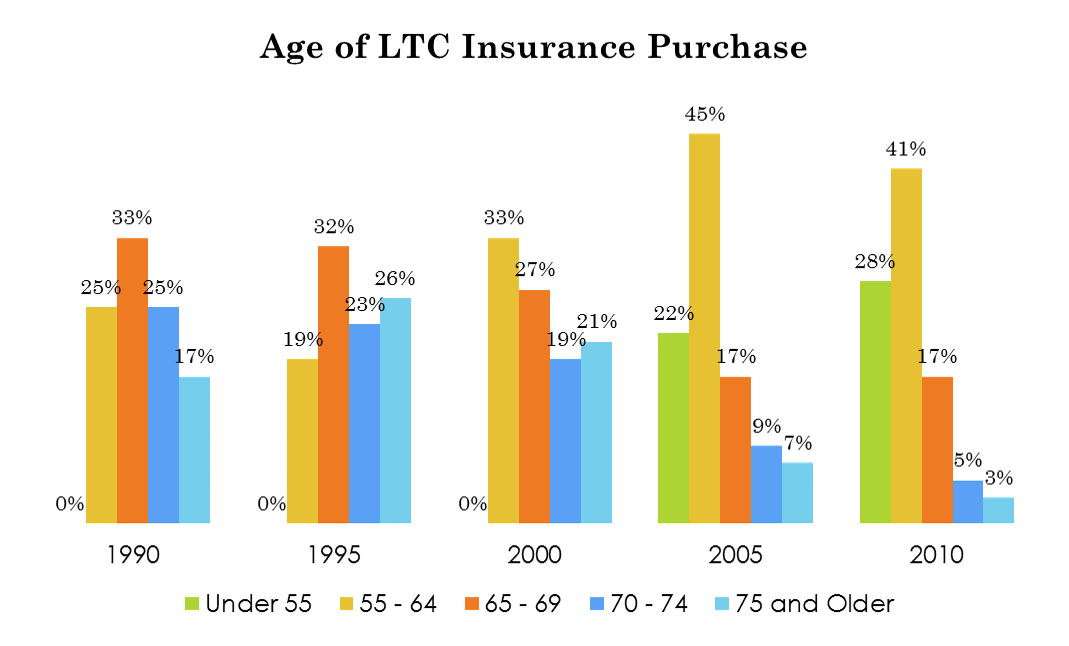 With 86% of buyers under age 70 and 69% under age 65, your prospecting efforts should focus on those who are most likely still employed over age 50 rather than those who are retired at age 70 or older. Younger prospects will find the premiums more affordable and more importantly, are more likely to be insurable.

Money pays for LTC Insurance, but health buys it!

Medical histories  –  which may result in a need  for  care, such as osteoporosis, falls and fractures.

Multiple medications – which may have adverse effects

Personal Independence – Maintaining personal independence such as working, either full or part-time, spouse in good health, family or friend(s) living in the household, participating in hobbies and other activities, current ability to drive and ability to travel and visit

Where should you focus your valuable selling time?

Assets are perhaps even more important than income in determining the suitability and viability of LTC Insurance:

Women often marry men several years older, who precede them in death. Women have a much greater risk of needing long-term care due to longer life spans. Women also have a longer life expectancy than men, outliving males by an average of seven years. Women who reach age 65 can expect to live an average of 19 more years to age 84. Among those who reach age 85 or older, 75 percent are women.

With advancing age, disabilities are more prevalent and the need for LTC services increase. Women are 83 years old on average when admitted to a nursing home; and at age 85 or older, women account for four out of five individuals receiving help two or more disabling conditions.

92% of both LTC Insurance Buyers and Non-Buyers are or have been married, with 72% of Buyers and 58% of Non-Buyers currently married or living with a domestic partner.

Marriage is a key issue in the LTC decision due to the presence of a free caregiver in the home.

Be sure to calculate the income of each spouse if the other dies first. Usually, older women cannot maintain the same standard of living after the death of their spouse and the possible loss of income.