What are some common characteristics of all people?

Their number one fear is rejection.

Their number one need is acceptance.

You must manage relationships in a way that protects or enhances their self-esteem.

Everyone approaches every situation with at least some concern about “what’s in it for me?”

Everyone prefers to talk about things that are important to them personally (LET THEM!)

People hear and incorporate only what they understand.

People often do things for other than apparent reasons.

Even people of quality can be, and often are, petty and small.

Everyone wears a social mask. You must look beyond the mask to see the person.

Although every person has each of these characteristics in common, we are still unique as individuals. It is imperative that you take the time to understand each prospect as “one of a kind,” with an combination of values, beliefs, biases, philosophies, perspectives on others, wants and feelings about themselves that are unique to them based on their life experience.

Your ability to understand the uniqueness of each individual prospect will greatly influence your long-term care insurance sales results. Here are some of the questions that must be answered to ensure you understand each unique prospect:

What do they value most in their lives? Ethics? Money? Success? Strength? Compassion? What really matters in their outlook on life?

What are their expectations and beliefs about how life does and should work?

What resistances or predispositions – fears, biases, prejudices – do they have?

What positions, approaches or philosophies are they most likely to accept or reject?

What do they need to hear from a person to conclude that that person is fundamentally “okay” and can be trusted?

What sorts of things do they consider relevant?

How do they feel about themselves?

What do they want most in their lives?

The challenge in understanding people is you can not ask these questions directly. First, most people don’t know the answers to these questions at a level where they can honestly answer them.

Second, their “social mask” precludes answering many of these questions directly, even if they did know the answers. The burden falls on you, the long-term care insurance agent, to discern their perspective through your observations of their behavior and through carefully structured questions that we will explore later in more detail.

What About Buyers and Non-Buyers of LTC Insurance?

Every five years or so since 1990, LifePlans has published a report titled, “Who Buys LTC Insurance?” It is a very insightful resource that studies both buyers and non-buyers and will take you far in your journey to sell more LTC Insurance.

We have only one disagreement with the LifePlans report. We would change the title to “What was Sold to Buyers of LTC Insurance?”

Let’s dissect the LifePlans data and look at how LTC Insurance plans have been designed since 1990 in six key areas: 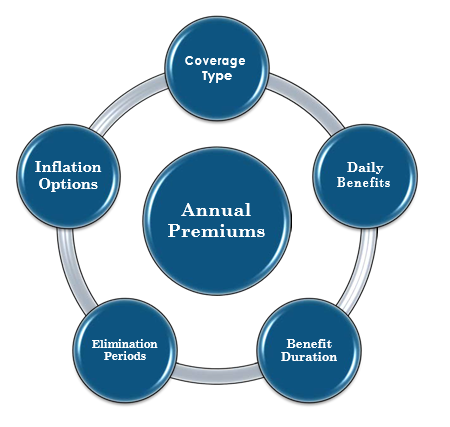 As the chart below depicts, Nursing Home Only coverage has declined from 63% to less than 1% of all policies sold.

Home Care only policies peaked at 9% of all plans sold in 2000, but have now declined to only 3%. 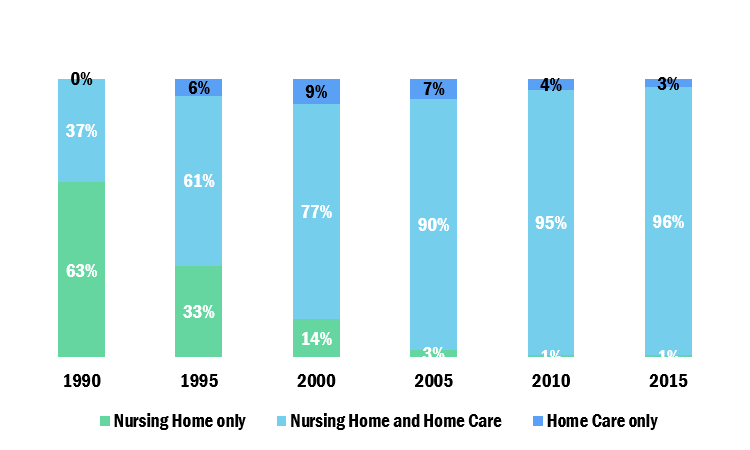 As more and more policies moved from Nursing Home Only, to Comprehensive Plans that covered Nursing Home and Home Care, the Average Daily Home Care Benefit started at 50% of the Nursing Home benefit, but ultimately didn’t lag far behind, increasing from $36 in 1990 to $155 in 2015. 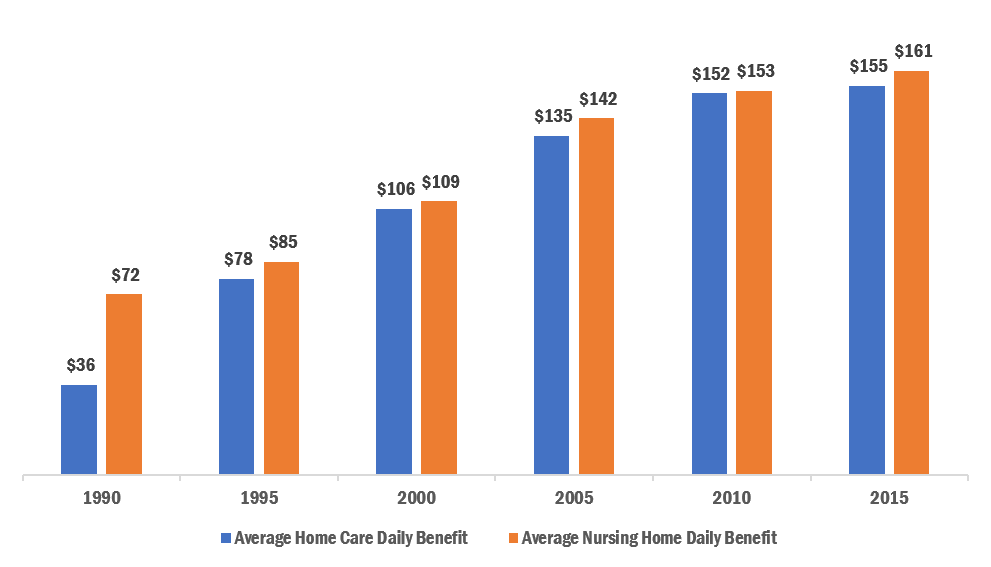 How long would the policies being sold provide benefits?

While the average duration was initially influenced by lifetime benefits, it has declined only slightly as insurance carriers stopped offering that option. 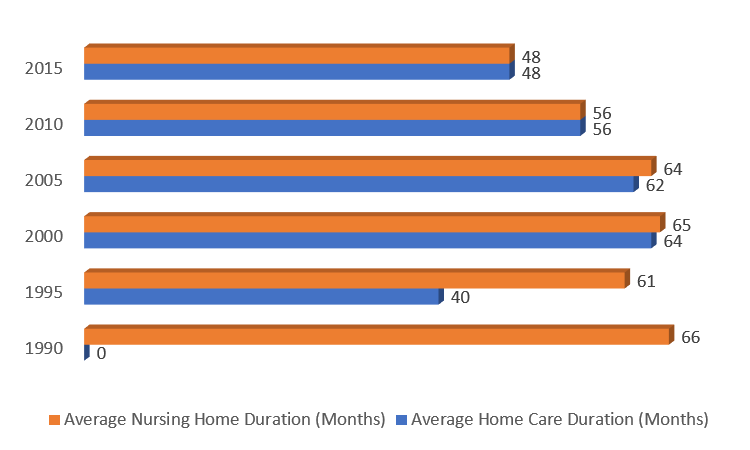 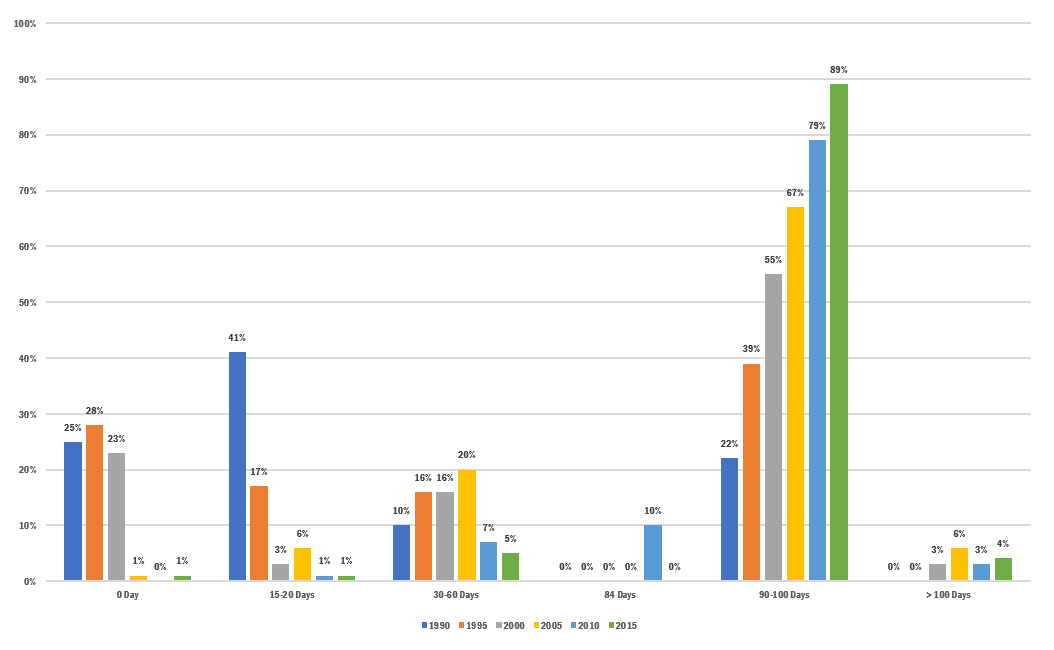 How have buyers of LTC Insurance prepared for rising costs of long-term services and supports? Twice as many purchased inflation protection from 1995 (33%) to 2015 (66%), with the percentage buying compound inflation more than tripling from 15% to 47%. 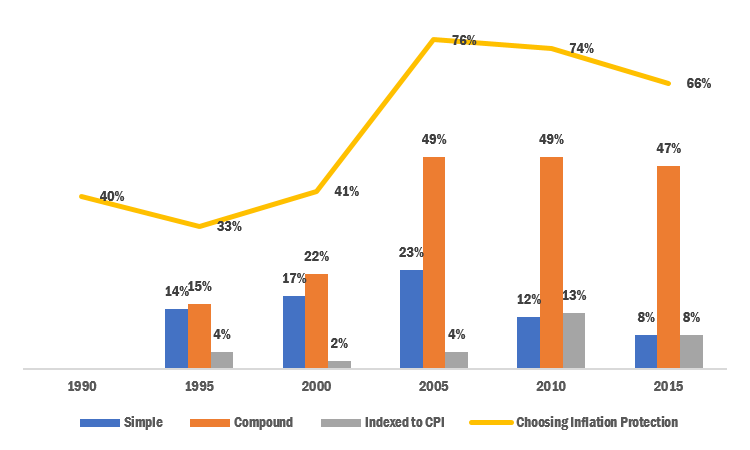 Clearly there are many factors that influence the annual premium, including all of the benefit choices discussed above, the age of the buyers and the unique and evolving rate structures of each carrier offering LTC Insurance. On average, however, we have seen the average annual premium nearly triple in the past 20 years from $1,071 to $2,727.

Here are the changes from 1990-2010, based on LTC Insurance purchases:

Purchases of no inflation policies have declined from 67% to 34%

Purchases of zero day elimination periods declined from 25% to 1%

Purchases of 90 day + elimination periods increased from 22% to 93%

Back to: LTC Insurance Selling Skills